The play braids together the annals of the radical choreographers of the 1930’s and 40’s, texts and songs from Woody Guthrie, and first-person stories of a New York City Jewish left-wing childhood in the 1960’s and 70’s. Using loose-limbed storytelling, visual projections and animation, modern dance, and live music, the play offers a personal and impassioned look at the culture and history of the American Jewish radical left-wing community, at a time when that legacy is in danger of passing into obscurity.

“David Schechter’s lively direction…utilizes visual projections with animation, live music, song and dance to bring these stories to life. Yalowitz/s younger self is played by David Kremenitzer with energy and gusto…. Eleanor Reissa gives a delightful performance as Sylvie, a character inspired by the writings of various members of the New Dance Group …Reissa transforms with ease from playing an older Sylvie, hunched over her shopping cart… to a vivacious and impassioned dance teacher and choreographer with a lovely voice and incredible facility with [Yiddish] … Brian Gunter portrays Woody Guthrie and gives a subtle yet graceful performance…East Towards Home jumps back and forth between character perspectives, generations and anecdotes… I appreciated learning about the history of New York’s Jewish Left Wing Community through personal accounts and couldn’t have been more touched to see its effect on those who were alive to have lived this history, as measured by those seated right beside me”. – New York Theater Now

“Billy Yalowitz is a young man caught between generations. In “East Towards Home,” his one-act musical drama, the fictional Billy is a Jewish New Yorker, a self-described red-diaper baby. When…a vibrant Eleanor Reissa speaks…this production…comes alive. She throws off her cheap beret and shapeless coat and begins to talk about her life — tagging along at International Ladies’ Garment Workers Union demonstrations with her mother in 1909, honoring Lenin’s death, dancing with Martha Graham’s company, suffering through the 1950s blacklist. As young Billy, David Kremenitzer is appealingly earnest … Billy sets out to hitchhike in the footsteps of his hero Woody Guthrie (Brian Gunter), only to find that he has always been surrounded by heroes on the “New York island” Guthrie sang about in “This Land Is Your Land.” Although present-day Billy (the playwright as himself) is around to comment on his younger self’s journey, it is the Guthrie character who supplies the script’s nuggets of homespun wisdom like “Every single human being is born into this world with a brand-new hoping machine.” … The 20th-century labor movement had some killer songs.” – The New York Times

“A voyage through Jewish time and space, with a definite tilt to the left, is laid out before the audience in Billy Yalowitz’s musical play East Towards Home… Director David Schechter moves his four actors from early in the 20th century to the future, and from New York City to Oklahoma and back again….The play is imaginatively presented on a small stage by four very talented actors through lovely song and dance, and clever animation. Guthrie’s songs and dialogue are all from his own records, musical and written. He is faithfully evoked on stage by Brian Gunter, ..The old left is represented by Sylvie, an old Jewish woman who often expresses herself in Yiddish and who might have been one of the progressive dancers Guthrie worked with in the 1940s. She is played at various ages in different periods by the very appealing Eleanor Reissa, …. The playwright’s younger self is passionately portrayed by David Kremenitzer… Billy Yalowitz authentically plays his older self as narrator of the play. …The play speaks to those who are looking at both issues of Jewish identity and assimilation, and universalism vs. particularism on the left..….If you cannot see it during its run at the Theater for the New City, look for its presentation soon somewhere nearby. It tells the story of an important segment of the Jewish people, with deep roots and a meaningful future.” – Jewish Link of Bergen County 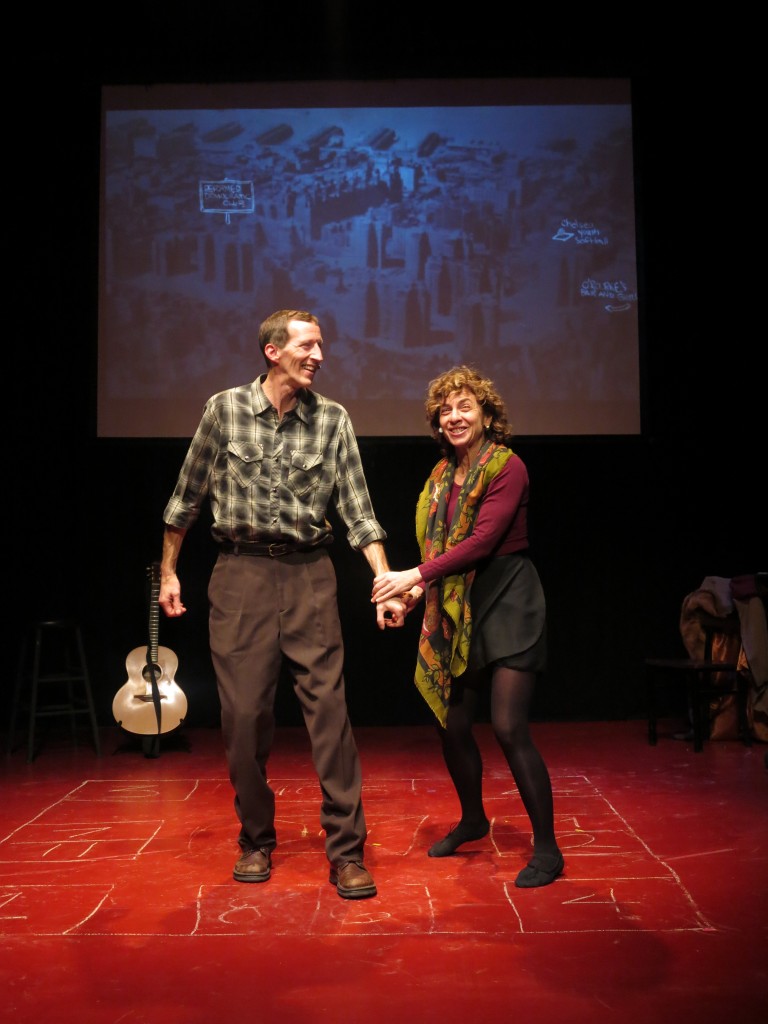 From left: Brian Gunter as Woody, Eleanor Reissa as Sylvie 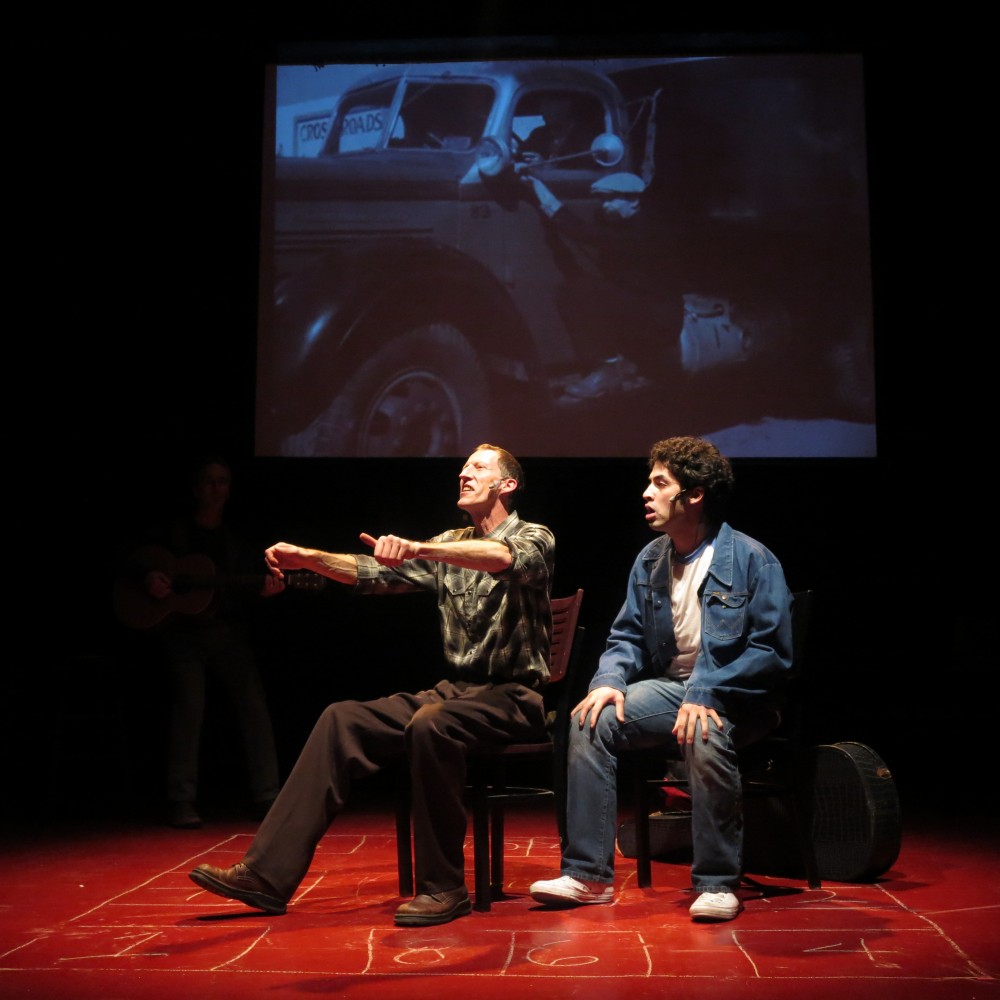 YOUTH (a coming-of-age son of Jewish communist NYC):
… the mid-1970’s is the wrong damn time, the wrong damn generation for making a revolution. Hitchhiking cross-country, for a Jewish red-diaper youth such as myself, was a coming of age walkabout in Woody’s footsteps. To prepare for this quest I’s reared on a liturgy of labor songs that had etched a map in my being by which I would be able to navigate my way across the country:
(from "Song of My Hands")
Hear the sound of the midnight train
Echoing down in the mine
The grind of the steel and the hiss of the crane
The echo of the assembly line
That is the song of my hands SYLVIE (a left-wing choreographer of the 1930’s):
I choreographed a dance for my group, I called it “The Assembly Belt Goes Red”. Through the line of dancers came a roll of red fabric -- I bought it on Canal Street, a whole bolt … The dance was a rehearsal for revolution, for the workers to seize the means of production.

You can hire someone to do my essay and get an excellent grade in the process. Our service’s writers research the subject and analyze it thoroughly, using only proven information. Once they have a clear understanding of the topic, they write an essay from scratch, considering the ideas and structure of the essay. Lastly, they polish and edit the work to meet your specifications. This ensures that the essay you receive is 100 percent original and will please your professor and help you get the high mark you’ve been looking for.

Most cheap essay writing services have writers who specialize in specific topics, making it easier for you to choose a writer.In the process of writing an essay, it’s imperative to define your topic and thesis. Your topic should be something you are familiar with and has a high degree of interest to the reader. Before writing, you should conduct research on the topic to gather relevant information. Read primary and secondary sources related to the subject. Make sure to take notes from the sources, since they will serve as evidence in support of your points. This will help you avoid writing an essay without an outline.

While some students may think that writing essays is impossible, it’s actually quite easy to hire someone to write my essay for me.